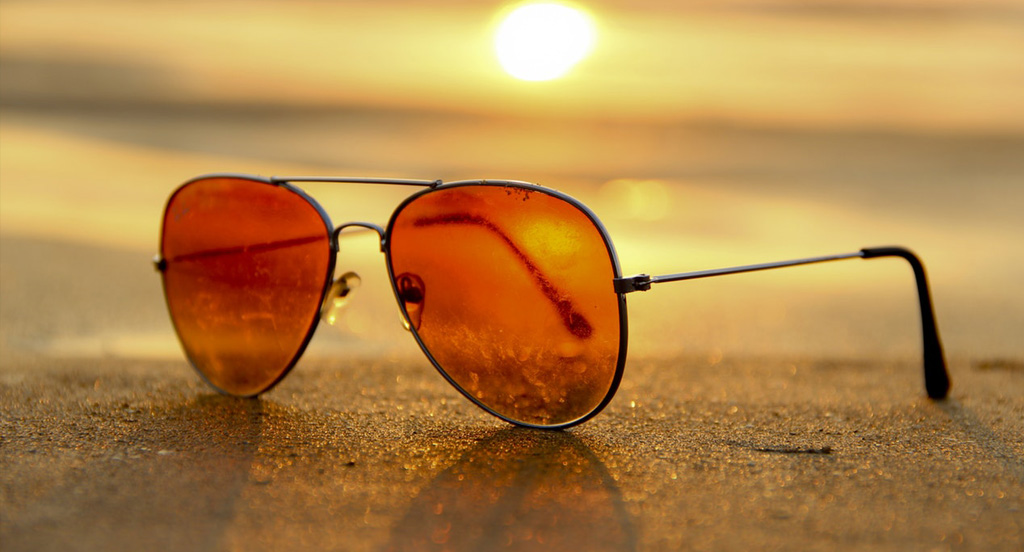 As we enter August, we hope you and your family are enjoying a peaceful, relaxing, and happy Summer. Normally, this time of year is the slow season for the markets, but as we have embarked on the second half of 2018, it appears that a new narrative has emerged. Inflation which has been kept in check for years is slowly trending higher, the Fed is in tightening mode and the trade rhetoric between the US, China and the rest of the world is intensifying. In fact, it seems like every day we have a new headline on the trade front that causes a knee jerk reaction in the markets. Just yesterday, the U.S. administration said that President Donald Trump has asked U.S. trade representative to consider imposing additional tariffs on another $200 billion of Chinese goods. China too responded by saying that it is fully prepared to retaliate if the U.S. imposed further tariffs.

Regardless of all this saber rattling, economic growth and corporate earnings across the globe remain strong and although there are some headwinds, we still see steady growth ahead. However, there is no question that uncertainty is starting to creep into forecasts. With the unknown outcome of rising global trade tensions, along with risks of increased inflation and rising interest rates, the wall of worry is getting taller and taller. We do remain optimistic for equity markets but do expect increased volatility as the markets digest developments on these issues.

As a result of the changing market and economic landscape, we are taking a more cautious approach to our portfolio allocations. By no means are we avoiding growth companies, but we are also looking towards “value” and dividend-oriented positions, over-weighting sectors that would be less impacted by potential tariffs, taking profits when opportunities present themselves and increasing cash levels when warranted.

Now is a good time to really take a close look at the current asset allocation of your accounts to ensure that they are aligned with your investment time frame, liquidity needs, your goals, long-term objectives, and your tolerance for volatility. At PWA, we can help you with a complimentary Risk Analysis Review. We use sophisticated portfolio analytics tools that run stress tests on how a portfolio would have performed under several different economic and market scenarios. The more informed you are about risks and how your investments are positioned, the more you can relax, sleep well, and enjoy the things you love most.

Normally, this time of year is the slow season for the markets, but as we embark on the second half of 2018, it appears that a new narrative has emerged.

Favorable economic indicators and encouraging corporate earnings reports helped propel stocks forward in July. Market growth has come despite trade wars between the United States and other trade partners, particularly China. Earlier in the month, the world’s two largest economies imposed tariffs of $34 billion on each other’s goods. Toward the end of July, there was hope of reopening negotiations between the United States and China in an attempt to diffuse the ongoing trade war. Domestically, the U.S. economy appears to be thriving. Over 210,000 new jobs were added in June, although wages have grown by only 2.7% over the last 12 months. Nevertheless, consumers are making more and spending more, while inflationary pressures on prices for goods and services remain in check.

Despite some periods of volatility, July proved to be a very good month for the benchmark indexes listed here. Led by the Dow, large caps, small caps, and tech stocks gained value over their respective June closing prices. Year-to-date, the Nasdaq is ahead by over 11.0%, followed by the Russell 2000, the S&P 500, the Dow, and the Global Dow, which is only 0.20% above its 2017 year-end value. 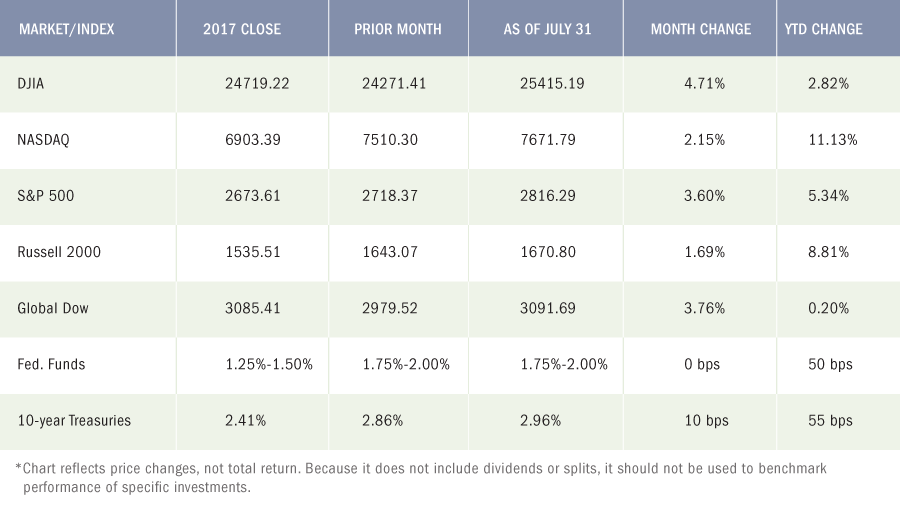 The Federal Open Market Committee does not conclude its next meeting until August 1. It is possible that interest rates will remain the same following this meeting. However, unless economic circumstances change dramatically over the next several months, it is likely that rates will be increased twice more before the end of 2018.

The second-quarter gross domestic product showed the economy expanded at an annual rate of 4.1%, according to the Bureau of Economic Analysis. The first-quarter GDP grew at an annualized rate of 2.2%. According to the report, consumer spending (personal consumption expenditures) surged, expanding at a rate of 4.0%. Net exports expanded by 9.3%. This is the first, or advance, for the second quarter GDP. The next estimates, in August and September, will include more complete economic data. With only three months remaining in the fiscal year, the government budget deficit sits at $607.1 billion through June 30. Over the same period last year, the budget deficit was $523.1 billion — a difference of about 16%.

Industrial production advanced 0.6% in June after edging down 0.1% in May. For the second quarter as a whole, industrial production advanced at an annual rate of 6.0% — its third consecutive quarterly increase. Manufacturing output increased 0.8% following a 0.7% drop in May. The index for mining rose 1.2%, its fifth consecutive month of growth. The output of utilities fell 1.5%. Capacity utilization, which estimates the potential for sustainable output for total industrial production, rose 0.3 percentage point for the and is up 1.5% over the last 12 months. New orders for manufactured durable goods climbed 1.0% in June following a 0.3% drop in May.

The advance report on international trade in goods revealed that the trade gap expanded by $3.6 billion in June, or 5.5%, over May. The deficit for June was $68.3 billion (the May deficit was $64.8 billion). June exports of goods 1.5%, while imports increased 0.6%. On a seasonally adjusted basis, June’s total imports ($210,263 billion) far exceeded exports ($141,931 billion). Prices for imported goods fell 0.4% in June, while export prices rose 0.3%. Over the last twelve months ended in June, import prices are up 4.3%, while export prices have advanced 5.3%. Overall, increasing tariffs don’t appear to be a factor in prices, at least for June.

European stocks got a boost from favorable corporate earnings reports and positive rhetoric emanating from a meeting between President Trump and European Commission President Juncker aimed at reducing reciprocal tariffs between the governing bodies. Japan and the European Union agreed to a free-trade pact that is targeted at reducing tariffs on Japanese automobiles and parts and European foods imported by Japan. The Chinese yuan has lost value compared to the dollar. Speculation is that the Chinese government is allowing its currency to weaken, lowering the cost of Chinese exports around the world, which may help offset the effect of U.S. tariffs on Chinese imports. Nevertheless, economic growth in China has slowed as a result of the tariff war with the United States.

Consumer confidence, as measured by The Conference Board Consumer Confidence Index®, gained some positive traction after dipping in June. According to the report, consumers’ confidence in the present economic conditions improved, but expectations for future growth were tempered.

Eye On The Month Ahead

The economy continues to show signs of strengthening despite trade wars, rising interest rates, and a stagnant real estate market. The labor market is expected to maintain its strong pace, while industrial production has been steady. Overall, August should see ongoing economic strengthening.

These materials were obtained from sources believed to be reliable and presented in good faith, nevertheless, First Allied has not independently verified the information contained therein, and does not guarantee its accuracy or completeness.

The information has no regard to the specific investment objectives, financial situation, or particular needs of any specific recipient, and is intended for informational purposes only and does not constitute a recommendation, or an offer, to buy or sell any securities or related financial instruments, nor is it intended to provide tax, legal or investment advice. We recommend that you procure financial and/or tax advice as to the implications (including tax) of investing in any of the companies mentioned.